For many, when the the Fleischers started their own color series in the manner of the Silly Symphonies, the cartoons lost their edge. Admittedly there are examples which confirm this: Bunny Mooning, the later Hunky and Spunky entries, Little Stranger et al. However there are plenty of anomalies: films no other studio (with the possible exception of Iwerks who, at the time, was primarily staffed by ex-Fleischerites) would create - especially Disney. One such excursion into the bizarre is a film that often slips my mind (along with the equally great 'Kids in the Shoe') when thinking of the best entries to the Color Classics series: Greedy Humpty Dumpty. 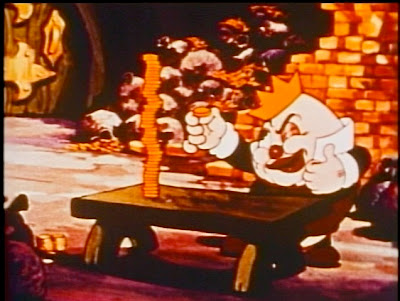 It'd be nice to see the original color for this film. Is this really three strip Cinecolor? I'm guessing it is but the Fleischers' first Technicolor film, 'Somewhere in 'Dreamland' (released January 17, 1936), was released several months before 'Greedy Humpty Dumpty' (released July 10). It seems, however, to have been used sporadically in the films which followed with some, like 'Play Safe' (October 16), using Cinecolor and others, like 'Hawaiian Birds' (August 28) using Technicolor. Regardless, and I know I beat this drum for every Color Classic post I do, 35mm would do much to reveal layers of detail that help to explain why these films rank amongst the best of the 30's.

By 1936, the release year of 'Greedy Humpty Dumpty', Dave Tendlar was already directing a group of his own having left Bowsky's a year earlier. Once off the hook as a head animator Tendlar dove into the workload with formidable zeal. In 1936 he was directing in practically every series the Fleischers had going with the exception of the Screen Songs. At the time of 'Greedy Humpty Dumpty', and after some personelle shifting through 1935, Tendlar's group finally settled on: Tendlar, Bill Sturm, Joe Oriolo, Eli Brucker, Nick Tafuri and recent arrival Graham Place. 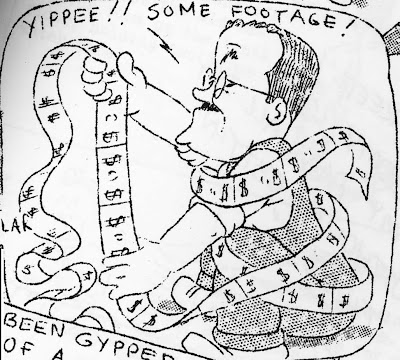 Gag cartoon of Tendlar from 'The Animated News'


It's hard to think of any cartoon of the 30's which delights more in cruelty and greed than Greedy Humpty Dumpty. What an insufferable jerk! And yet this cartoon hasn't a hero in sight and we stay with regent asshole through the length of the picture. Are the denizens of Fairy-Tale Land oppressed under his regime? It seems so ... but their indifference to being whipped is pretty mystifying. In fact, their sanctimonious chiding and the joyous zeal with which they build the tower, fully cognescent that it will mean the end of the big egg ("the bigger they come, the harder they fall"), doesn't exactly make them clearly sympathetic either. This is the sort of moral indifference which clearly defined the New York studios over the west coast.

The even timing of the sheep could be an example of the meddling of the Fleischers' checker Nelly Sanborn. She was known to ask inbetweens of drawings she felt were too far apart and raised the ire of many an animator. It certainly seems like a mistake and yet there is something otherworldly and hypnotic about it as the two doe-eyed pilgrims sway back and forth like reeds under water. 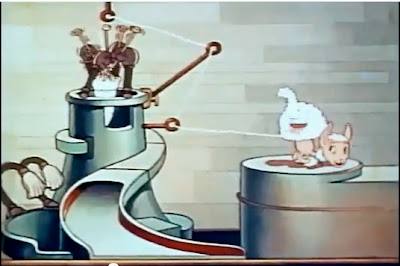 The same basic gag occurs in the later 'All's Fair At The Fair'. The timing here is quicker and funnier but less hypnotic. 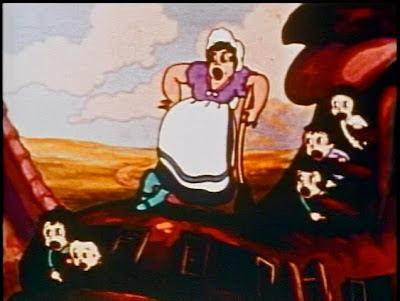 A batch of characters resembling those of 'Kids in the Shoe'. GHD begins with much chiding. Are we supposed to sympathize with these characters ... 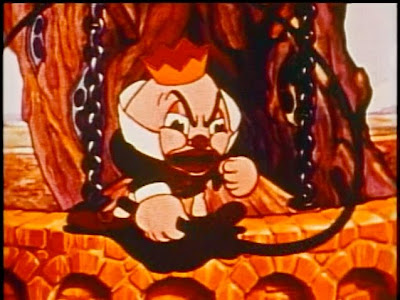 or the character that's whipping them?

But the moral question of greed and it's consequences is not really the focus of 'Greedy Humpty Dumpty'. Rather it's more of a framework, a ruse almost, on which gags and funny animation could be built. Fairy Tales, with their clearly defined moral boundries, were strange territory for the Fleischer animators who were likely more influenced by the similar moral ambiguity and rough and tumble action of NY newspaper comic strips of the era (and before) over the more rarified world of professional children's book illustrators. But that statement may not be entirely true, as a number of Fleischer animators belonged to illustration societies, so it may have been a more conscious choice to steer from the more subtle but less immedietly legible (and less funny), approach of children's books. I have no idea. 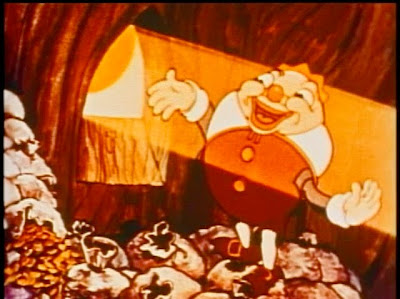 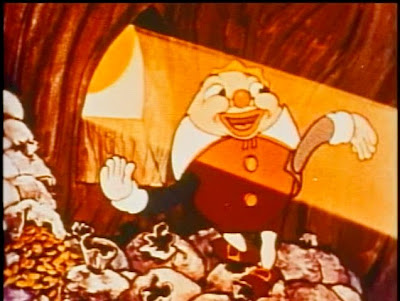 I do know this however: GHD has the greatest arm animation in the history! I recommend the Greedy Arm Dance for anyone who has experienced a windfall. Try it for yourself and be amazed at the results! 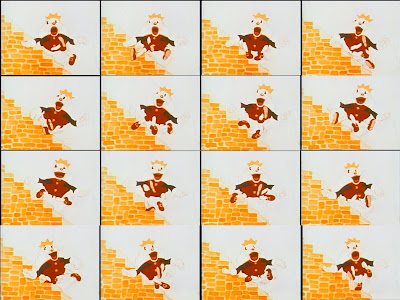 Be aware though that The Greedy Arm Dance can only lead The Greedy Step Dance. You will need to grow a third foot but the results are worth it!

Of course the biggest shock of 'Greedy Humpty Dumpty' is who the character was based on: none other than Dave Fleischer! Dave wasn't new to being caricatured in Fleischer cartoons. In fact you can see him as a mountain in my post in 'Hide and Seek'. However, you have to give him credit for being a good sport about being so mercilessly mocked in 'Greedy Humpty Dumpty'. From all accounts Dave was a pretty likable guy. What inspired Tendlar to turn him into a greedy demagog I have no idea! 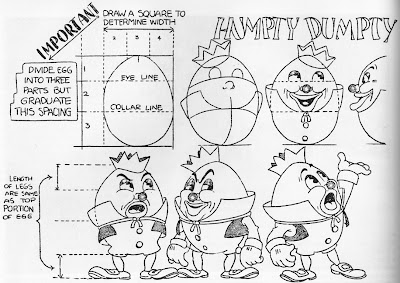 Do you see the resemblance? Allow me to clarify... 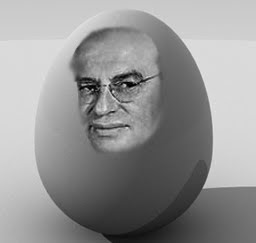 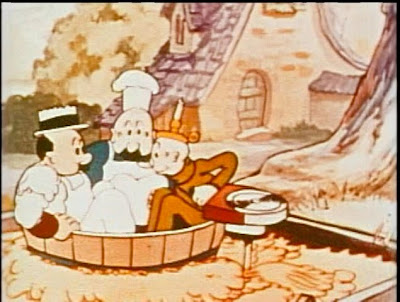 Dave wasn't the only one to be caricatured though. Wearing a straw boater and spinning in a washtub (in a vat of gold cement no less!) is what appears to be none other than Max Fleischer. Can't be certain of course, and Tendlar isn't around to ask, but Max (sans boater) was depicted similarly in many gag cartoons of The Animated News (the studio's in-house newsletter). 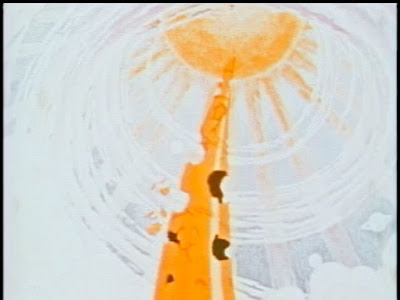 Aside from funny action, Greedy Humpty Dumpty employs quite a lot of difficult perspective scenes as the Fairy Tale characters build the tower steps just in time for Humpty to dance across them. A number of techniques of GHD, such as use of cut outs and FX animation, would be employed later in the Superman cartoon series. The crumbling tower, for instance, seems to predict the crumbling fortress of the first Superman cartoon. 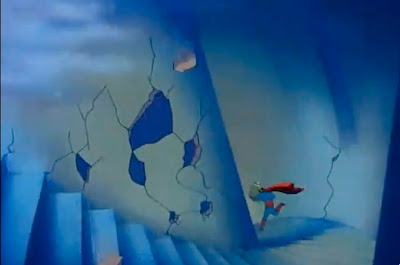 'Greedy Humpty Dumpty' is certainly an oddity. The joy of the cartoon is to be found in the animation and design, which is pretty amazing at times, and the relish Tendlar and Co. find in taking the greedy action to an utterly ridiculous apex ... and then destroying everything-including the main character! Not sure of the moral message of it all ... but then again neither, I think, did Tendlar! 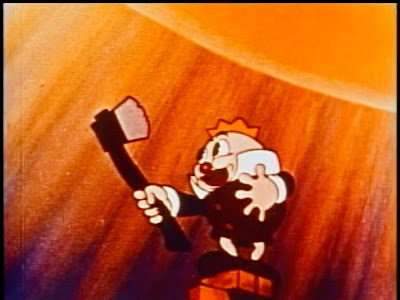 Who'd have thought the secret to riches was a jagged axe? 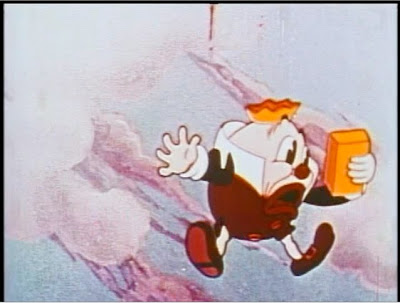