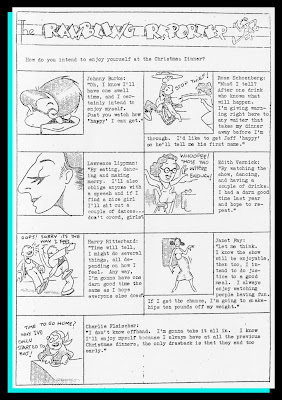 From the December 1935 issue of the Fleischer Animated News (click to enlarge). Happy Holidays & thanks for visiting my brain in 2010!!
Posted by J.V. (AKA "White Pongo") at 9:21 PM No comments: 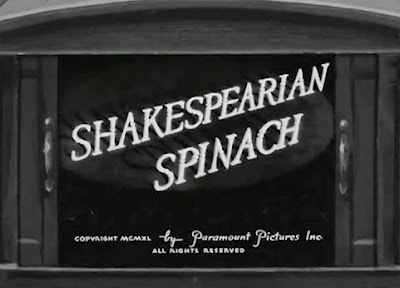 Well, the video is still out so this week so I thought I might offer up what is still available to me: audio - and a mystery musical passage from the 1940 Max Fleischer Cartoon: "Shakespearean Spinach". 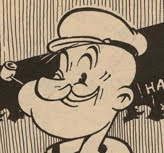 The cartoon, 'Shakespearean Spinach', was released in January 1940: well into Fleischer Studios' Miami stay. From what I have read the move was advantageous in some ways more than others. While the lush climate must have been overwhelming for bunch of urbanites outside of New York for the first time there still was the matter of how the heck to conduct business when so far away from it. It must have been a crazy amount of telegrams securing long distance all the various services required for a cartoon film studio to operate - especially in the wild and wooly 30's! As I understand it, one of these problems was music. You weren't likely to find the top musical talent as simply in Miami as you would have in New York in the 30's. This is why, as I understand it, the music (or parts of it) were farmed out to New York and Los Angeles. This long distance approach could have meant the increased likelihood of being short on music when production of a cartoon was finishing. Was this going to stop production? Heck no!

Four years prior to the Fleischer move there began a new strip of nightclubs located on NY's 52nd street. Among them were: Leon & Eddie's, The Famous Door, Kelly's Stables & others. The idea was to have a street of clubs which offered different varieties of jazz music: from dixieland to swing and, ultimately, bebop. It was an area where musicians as different in style as Art Tatum and Eddie Condon could be heard directly across the street from each other. It was at 52nd Street's Onyx Club that John Kirby and his 'Orchestra' (actually a sextet) made it's home. The Kirby band (at the time known under the monicker "Biggest Little Band In The World") forged it's way in the jazz world with light, but incredibly tight, ensemble swing arrangements of popular classical melodies. The practice of 'swingin' the classics' was generally despised by serious music critics but the public ate it up. Besides there was no royalty to pay to record such tunes! Soon everything was getting the swing treatment: from Bizet's Carmen to Dvorak's Humoresque to Flotow's Martha. 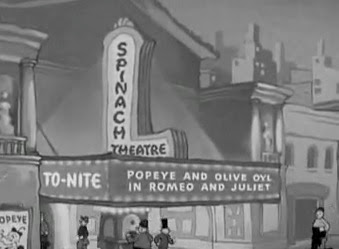 Which brings us back to the mysterious music heard in the 'third act' of Shakesperean Spinach. Oddly enough it was around 1941 that ASCAP pulled all the songs it owned from the radio necessitating the use of such royalty free songs. Whether this impacted Fleischer Studios (or if the exact chronology lines up) I don't know. What I do know is that at every time I watch 'Shakespearean Spinach' I am quite certain I am hearing Martha as performed by The John Kirby Orchestra. Or rather a 78 of the John Kirby Orchestra as a distinct change in the compression of the soundtrack is clearly audible. The practice of using 78 rpm records to 'sweeten' or otherwise fill out soundtracks certainly wasn't new to animation. At least one of Iwerks' Willie Whopper cartoons made use of 78 records by Jelly Roll Morton but it was unusual by 1940 standards. Back in New York the Fleischers could have hired John Kirby for a soundtrack (as they had with Cab Calloway & Louis Armstrong years earlier) but once in Miami, virtually Siberia as far as the Music Industry was concerned, were they backed into using a record? I can find no recording of Martha by John Kirby in my collection so I can't be sure. I think I have all the commercial records through 1941 ... but they also recorded for Radio. For those interested here is the link to 'Shakespearean Spinach".
The passage I'm referring to occurs roughly between the following points (below). You will have to let it completely load before you can scroll to the correct point. 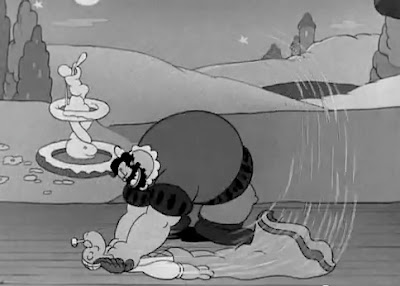 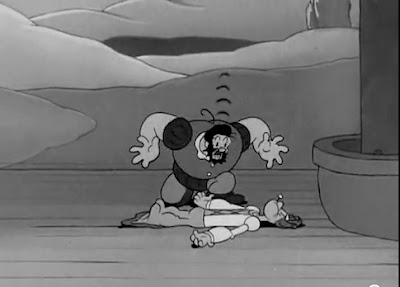 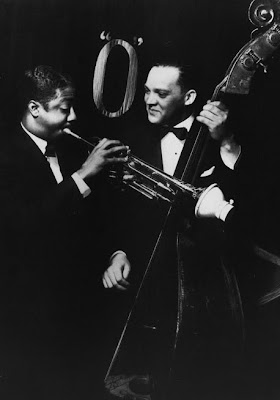 Charlie Shavers & John Kirby pose before the Onyx 'O'.
I can't give definitive proof but here is John Kirby performing 'Bounce of the Sugar Plum Fairy' and, again, at the end of this link performing a movement from Beethoven's 7th Symphony. Take a listen and maybe you can solve a mystery.
Posted by J.V. (AKA "White Pongo") at 11:59 AM 5 comments: