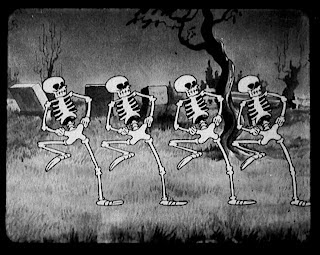 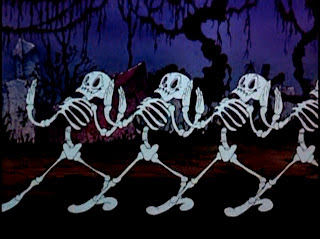 In animation history there seems to always be a tendency to relate the un-relatable. One such case is the film 'Skeleton Frolic' which was produced by the Ub Iwerks' studio for Columbia's Color Rhapsodies series and released in 1937. Revisiting a subject which had already been done with great success eight years earlier was probably the first mistake. The second was it's place as part of the Color Rhapsodies series which, with notable exceptions, had become woefully dreary by the late 30's. The third, I believe as many historians have seen it, is the year in which it was released - 1937. By that time most accounts have animation divided into two camps: Warner Brothers for comedy and Disney for beauty.  Since 'Skeleton Frolic' was a film which didn't produce  the earth shattering influence of Bob Clampett, 'Snow White' or even the original 'Skeleton Dance' it must be "just a faint reminder of the first's originality and charm".
Personally, I like both films but I think 'Frolic' has taken many undeserved brick bats over the years. To look at the film you can see that it wasn't so much of a re-do as it was an upgrade. Things which might have been a little flat and perhaps not possible in 1929 are flushed out with greater atmosphere and more dynamic posing. For instance, in 'Skeleton Dance' the action is fairly lateral moving - going from right to left, left to right and so forth. Perspective is used but sparingly. 'Frolic' on the other hand gives us shots like this with diminishing perspective and perhaps a certain melevolance  lacking in the original. 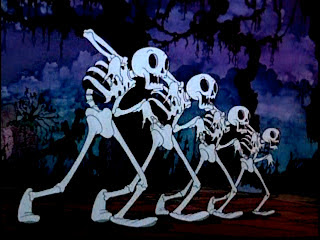 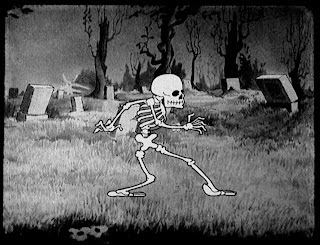 And I doubt an upshot such as this would have been attempted in 1929. Note also the background which conveys a far clearer impression of mood than the cloudless skies of 'Skeleton Dance'. 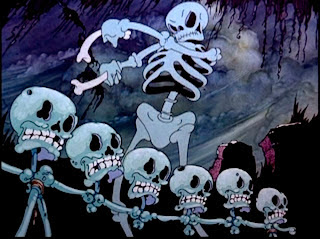 Since most histories of animation virtually write off the Iwerks' Pat Powers/Celebrity Productions output , any connection to those films and their graphic strengths is seen as irrelevant. Ub didn't have Walt - that's all that mattered.
In later years, comments made by Shamus Culhane (who seemed to like only three other people besides himself - Walt Disney, Don Graham and Norm Ferguson) didn't help much. However,  for those of us who love the Iwerks' Studio films,  a strong stylistic connection can be made between 'Frolic' and those earlier cartoons.  One such example, I think,  is the Skeleton from 'Spooks': a Flip the Frog cartoon released in 1932. 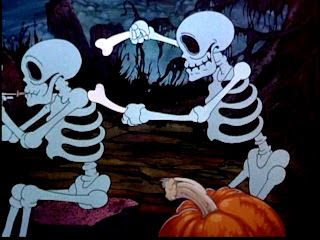 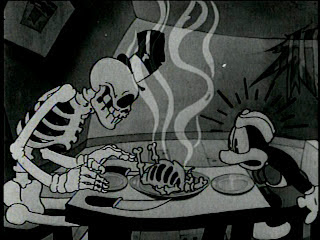 Here too is a strong upgrade, in 'Frolic',  of a rather flatly animated scene (one skeleton playing another's rib cage like a xylophone)  from 'Skeleton Dance'. Perhaps Les Clark's achievements following 'Skeleton Dance' is one of the reasons this scene is seldom criticized 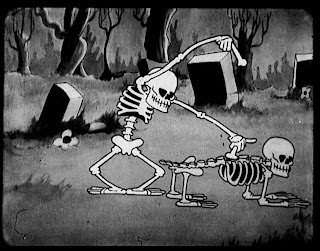 Even at the close of both pictures one can see quite a difference not just in the posing, which is more dynamic in 'Skeleton Frolic', but in the backgrounds which clearly delineate the change in mood. The transition from night to dawn is harder to read in 'Skeleton Dance' though that could be due to it being a B&W film and by the quality of printing which was not quite  up to standard in early sound films. 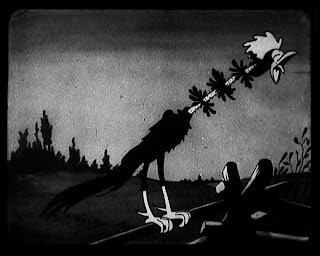 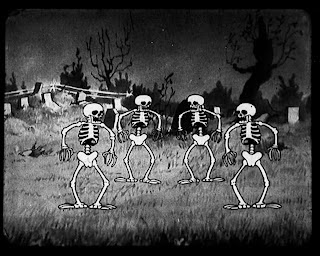 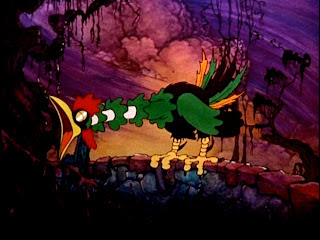 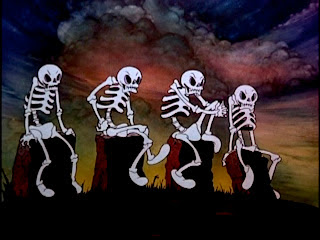 'Skeleton Frolic' does have it's share of problems: most notably in the beginning of the film where the animation is extremely choppy and lacking the evocative light and shadow of 'Skeleton Dance'. Comparing the two is, I think, perhaps a little unfair. Kind of like saying 'Skeleton Frolic' is no 'Porky in Wackyland'. It's apples and oranges.  It's likely the film was chosen by Columbia in an attempt to make 'lightning strike twice' - a classic showbiz mistake. I just wanted to point out what I thought the strengths were of  a misunderstood film.
Posted by J.V. (AKA "White Pongo") at 12:43 PM

On my blog my friend mmm...donuts made a post about this matter once.
Check it out and let me know if you like it

The two posts are pretty similar - the connection to 'Spooks' etc. - I hadn't read it until you linked! I guess the point I was trying to make is I think of 'Skeleton Frolic' as a good early 30's cartoon made in the late 30's (this is seen as a weakness by some) and a worthy sequel to the original. Thanks for the feedback!

hi there - The Museum of Modern Art will be showing Skeleton Dance tomorrow, 7/23 at 6 pm - it's the preview for FANTASIA, as part of their current Dali exhibit!