"Everyone loves Kiko! Kiko the Kangaroo!" Not really but that's how the theme song went ... ordering audiences to obey. They didn't. Bill Weiss, a business manager from Terrytoons even said the character was "nothing to brag about".  Admittedly it is odd that a cartoon series produced in 1936/37 should have sections of animation that  resemble Van Beuren cartoons from the early 30's! Actually they are pretty hit-and-miss but there's something about a few of them that I can't help but love ... like a sweet retarded cousin! 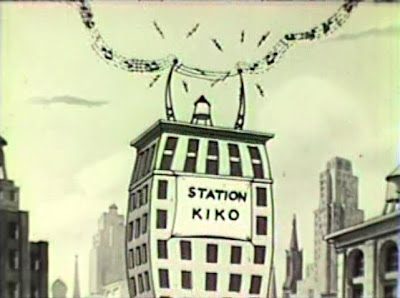 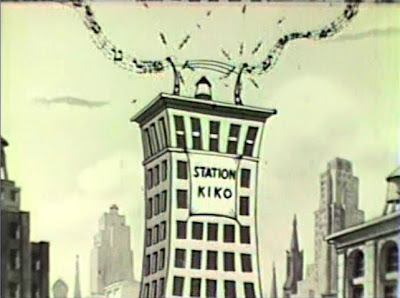 For example, every time I see 'Red Hot Music' I feel better. The animation is wildly inconsistent but the general pep of the whole thing (thanks in no small part to Philip Scheib's music) raise it (sort of) out of the usual Terry doldrums. 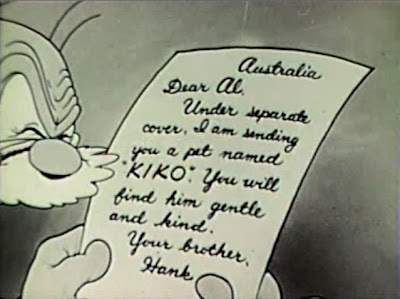 Of course nothing beats Kiko's first appearance in the 1936 cartoon 'Farmer Alfalfa's Prize Package' where we find out that Farmer Al has a brother named ... Hank? 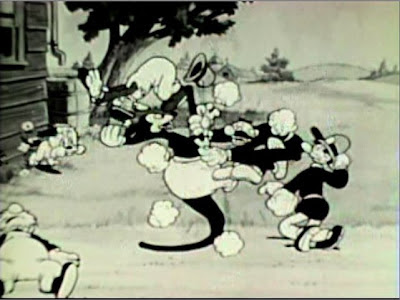 Only in a Terrytoon would a lead character beat the tar out of a gang of cops ... 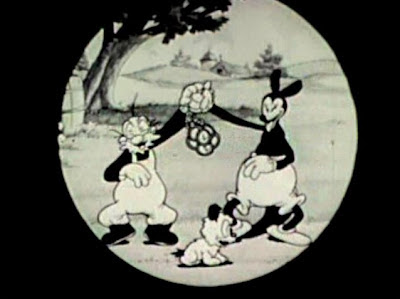 and, to top it off, rob them of their watches in time for the iris-out!
Now that's what I call a moral! 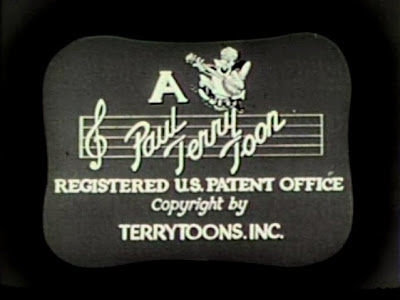 More on Kiko in a future post.
*Correction* The correct lyric is: "All the kids like Kiko...". Evidently kids were not expected to love him and grown-ups were not even expected to like him (which they evidently didn't)!
Posted by J.V. (AKA "White Pongo") at 3:53 PM

Kiko is 1930s character development reduced to its rawest, purest form.
In his first cartoon, Kiko was a rowdy upstart, the kind who (as you point out) will clobber, then pickpocket an entire battalion of cops. He is an antihero.
With his SECOND cartoon, upon attaining title character status, Kiko is immediately a put-upon straight man: "Mr. Boring," as my dad once called him.
It's the evolution that took Mickey and Oswald each six (ill-advised) years; Betty Boop four, and Porky Pig three. You start out actually meriting your stardom, and you end up giggling pathetically at the supposedly funnier antics of your dog.
I don't think Kiko had a dog, but was he ever again the pest of his first appearance?

Looking at the Kikos again (I don't have them all) I only noticed one incident of bad behavior, in 'Skunked Again', where Farmer Al and Kiko knock over a Walrus cop and laugh at his misfortune. Unlike 'Prize Package' they are eventually punished for their behavior. Even Farmer Al seems behaved better in the Kiko cartoons compared to his animal-loathing self of the early 30's. 'Mr. Boring' is not entirely untrue but even boring Kangaroos need love too!

Here's what to do with boring kangaroos:

(Thad and Tom will tell you they saw this one coming a mile away.)

You'd do that to Kiko? That so sad and delicious. But what to do with Puddy?